We’re already experiencing the impact of climate change across the world; now an update from the IPCC suggests weather extremes could become the norm in the near future. Here we explore the latest IPCC information about climate change and explain why we need to adopt climate change mitigation tactics and ensure climate-resilience now to succeed in our changing world.

What is the IPCC?

The Intergovernmental Panel on Climate Change (IPCC) is the United Nations body for assessing the science related to climate change. The IPCC consists of 3 working groups, each with a different focus:

The greenhouse effect is a popular name for the earth’s warming effect which occurs naturally when gasses in the atmosphere trap heat from the sun and prevent it from escaping back into space. Greenhouse Gasses (GHG) are responsible for causing the greenhouse effect, which is a natural phenomenon and an important part of maintaining life on Earth. 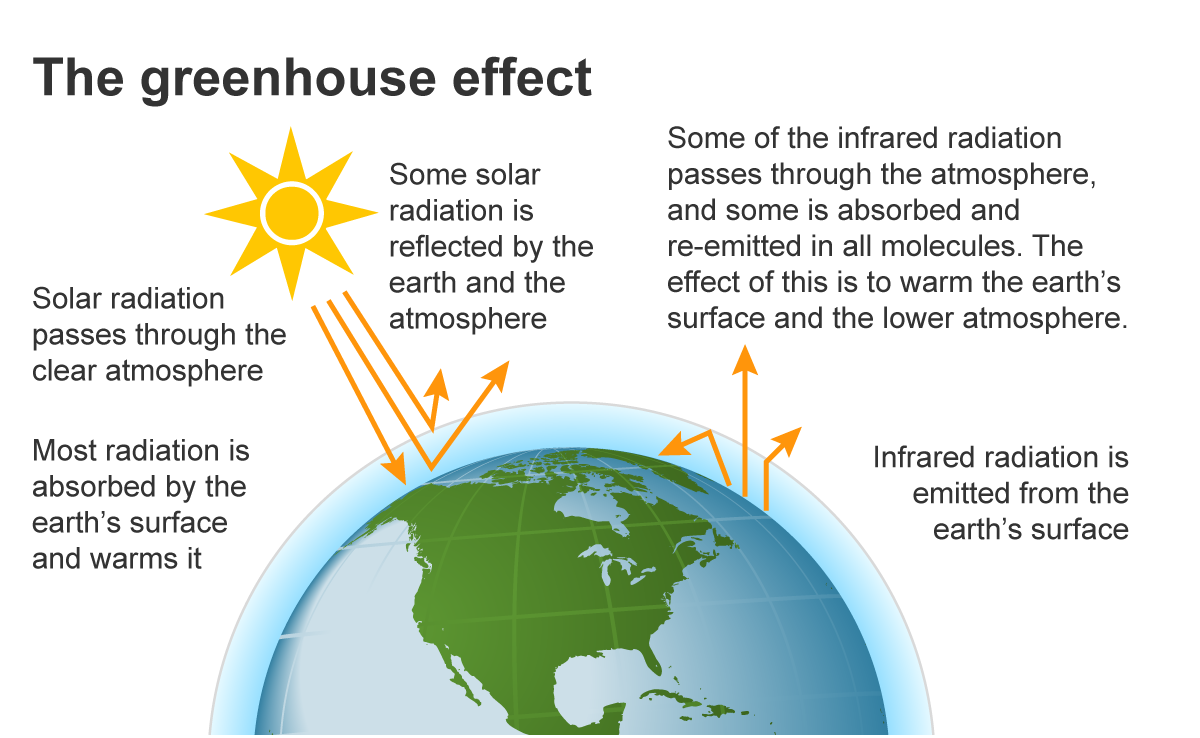 Since the industrial revolution, the growing concentrations of Greenhouse Gasses, including carbon dioxide (CO2), methane (CH4), nitrous oxide (N2O), and a variety of fluorinated gasses, emitted by human activities have started to absorb and reflect more solar radiation back to the Earth instead of allowing it to ‘bounce’ back into space, causing the phenomena we refer to as ‘global warming’.

The latest IPCC report assesses global sources of greenhouse gas emissions and the progress of strategies for mitigating the impacts of climate change. You can read the full IPCC report here.

According to the report, average net annual human-caused GHG emissions were at their highest levels in human history between 2010 and 2019, with urban areas responsible for an increasing proportion of the emissions.

Based on current national GHG emissions commitments for 2030, global temperatures will likely exceed 1.5°C (2.7°F) of warming in the 21st century.

Time is not in our favor, as this warming scenario may be upon us sooner than people would expect. Recent findings from the World Meteorological Organization predict a 50:50 chance at least one year between 2022 and 2026 will exceed 1.5°C above pre-industrial levels.

What Will this Kind of Global Warming Look Like?

According to the IPCC, 1.5°C of global warming will lead to increasing heat waves, longer warm seasons, and shorter cold seasons. At a 2°C increase, heat extremes would more often reach critical tolerance thresholds for agriculture and health:

The IPCC believes the speed of these global changes will exceed most organisms’ ability to adapt to them, causing many species to face extinction.

We Need to Act Now!

Governmental policies established as a result of commitments made in the Kyoto Protocol and the Paris Agreement have already successfully prevented the emissions of several Gigatons of CO2, targeting deforestation, energy efficiency, new technology deployment, and carbon accounting as their main mitigation efforts.

However, there is an implementation gap that must be bridged with stricter enforcement and faster adoption.

Without more mitigation policies, GHG emissions will continue to rise, leading to global warming of 3.2°C by the end of the century.

The rate of emissions growth year on year slowed between 2010-2019 in comparison to the previous decade. That means we’re beginning to emit GHG at a slower rate than before.

The report attributes this to technological innovation and a shift towards renewables. Sustained decreases in the cost of solar energy (up to 85%), wind energy (55%), and lithium batteries (85%) have also boosted the use of renewable technologies, facilitated by government policies.

But radical changes in the energy sector are still needed.

It's Up to All Of Us to Take Action

Opportunities for reducing GHG emissions also exist within the transportation, construction, agriculture, and forestry sectors. The graph below shows the potential of different strategies to reduce GHG emissions by 2030.

The longer the bar, the more GHG emissions will be avoided in equivalent Gigatons of CO2. The color scale shows the cost range of implementing each strategy per ton of CO2, with blue indicating more affordable strategies and dark red indicating more expensive ones. 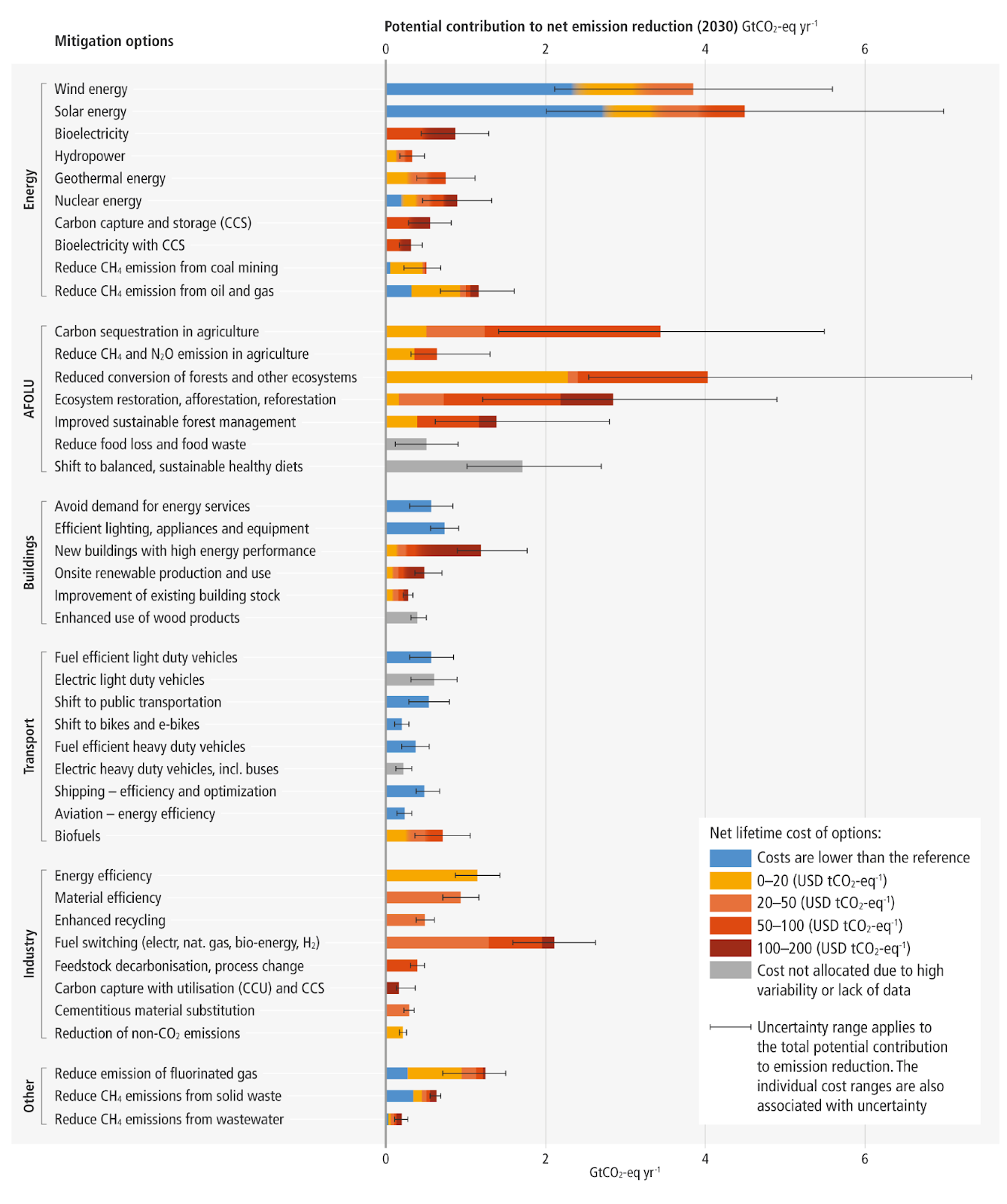 As the graph shows, policies on land-use, agriculture, and renewable energy hold a lot of potential for net GHG emissions reduction.

The IPCC report acknowledges and encourages the adoption of digital technologies like environmental intelligence which contribute to the achievement of several Sustainable Development Goals whilst simultaneously supporting climate change mitigation and resilience in our communities.

Individuals across the world have already started prioritizing environmental awareness when choosing different products and services, especially in the health, transportation, and lifestyle sectors. The report makes it clear that companies investing in GHG mitigation strategies now, who prioritize developing more climate-resilient offerings, can lower future costs and distinguish themselves as environmental trends pioneers in this long-term climate challenge. 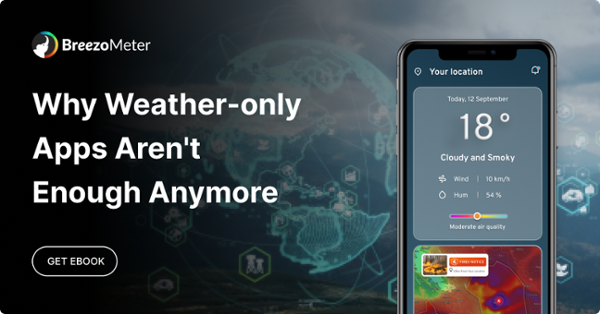