Ran Korber & The Journey to BreezoMeter

The road to the foundation of BreezoMeter began in 2012. After studying at the Technion Institute of Technology and working as an environmental engineer in several factories, Ran Korber, our future CEO and co-founder, and his wife, pregnant with their first child at the time, were ready to settle down and had begun the process of looking for a home. They had the usual checklist of parameters that every couple has, from apartment size to the rankings of the local schools. But Ran’s wife had an additional variable they needed to take into account, something which in turn would completely change the course of their lives.

As an environmental engineer, Ran knew the dangerous effects of long-term exposure to air pollution and how they can jeopardize the wellbeing of his wife and unborn daughter. So Ran turned to his colleagues in the environmental protection agency with what he assumed would be a simple question: what was the healthiest place to live in Israel’s northern region?

Turns out, getting a reliable answer wasn’t that simple. To Ran’s astonishment, there was no credible data from which to draw a verified conclusion. While the environmental protection agency did monitor air pollution, they only provided a very partial image. Because of the wide dispersion of the pollution sensor units they were using, you could often see as big as a 50-kilometer gap between one sensor and another.

That’s not exactly what you call location-specific...

Ran’s next step was to turn to who would become his future partners - Emil Fisher and Ziv Lautman. Ziv was employed at the environmental protection agency, and Emil, Ran's long time best friend since the age of 15 was a natural choice with a B.Sc. in Software Engineering at the Technion under his belt, experience in hi-tech and major defence projects and a passion for solving technological problems in our environmentally challenged world.

After realizing this was a major problem with no apparent solution, the trio decided to create one. They signed up for the Technion Institute’s Accelerator program for emerging startups, quit their day jobs, and founded BreezoMeter. They began by developing an algorithm that would calculate the environmental risk in several locations Ran was considering for his new home.

The initial system was very simple - but it gradually grew in complexity. Today BreezoMeter’s API calculates all the possible sources of pollution in designated areas and creates an air quality forecast at a five-meter resolution, using predictive models for everything from real-time traffic pollution to sandstorm weather forecasts, fires, and pollen, and providing decision-making recommendations.

The Personal Aspect of Starting a Startup

Creating something out of nothing, especially something that didn’t precisely exist before, is not a walk in the park. You have to be all-in.

“Starting a company is like throwing yourself off the cliff and assembling an airplane on the way down.”

BreezoMeter’s three co-founders had discussed the implications of taking the proverbial dive off that entrepreneurial cliff with their wives, knowing that the road ahead, especially in the beginning, can be a little rocky. They would have no safety net, and in the beginning stages, no monthly income either. Luckily, the wives were (and still are) supportive and gave the trio their go-ahead.

With no income, BreezoMeter’s three co-founders knew they needed to be proactive, and decided to sign up to a variety of startup competitions. BreezoMeter was one of the six chosen six winners in a UN competition for the most innovative ideas that can positively affect the world. Simultaneously, the company won Israel’s Most Promising Startup award during the global entrepreneurship week and later won the global award in the same category as well.

In early 2015, BreezoMeter’s co-founders were among the 72 entrepreneurs chosen by then US president Barack Obama in a global initiative to help aspiring entrepreneurs in developing countries. The trio even got to meet President Obama in the White House and during his historic visit to Kenya. This experience coincided with the World Health Organization declaring air pollution as humanity’s greatest challenge and publishing new statistics based on pathologic and epidemiologic studies on the severity of air pollution’s negative impact on global health. A 2019 Harvard university survey even deemed air quality the top influencer on employee performance and wellbeing in the US.

Naturally, these events only further cemented Ran’s passion for BreezoMeter’s goal, and the objective of improving global health with localized real-time air quality data was becoming ever more feasible.

They Grow Up So Fast

Since its foundation, BreezoMeter grew from three to forty employees strong and is in the process of recruiting 20 more employees during 2021.

The company has raised 15$ million in investments so far, not including a research grant from the highly esteemed Horizon 2020 - the EU’s largest research and innovation program. Over half a million smartphone users have downloaded the BreezoMeter app, and an estimated 100 million people use the API’s air quality data analysis and information on a daily basis, thanks to corporations with brands like Dyson, Yahoo, and Apple, which integrated BreezoMeter’s real-time air quality database in its weather forecast app.

What The Future Holds

BreezoMeter’s goal is to incorporate more and more factors into its predictive air quality algorithms. From earthquake predictions to information on local water quality for personal consumption and agriculture.

Apple’s adoption of BreezoMeter’s air quality API was a gigantic step towards better global outreach, opening the door for hundreds of millions of potential users, something Ran is incredibly proud of. The company’s main objective for the coming years is to go from millions to billions of potential users, who can utilize BreezoMeter’s real-time air quality database and heatmap imagery to make educated decisions that improve their personal health and lifestyle. And it all started with a husband’s care for his wife. 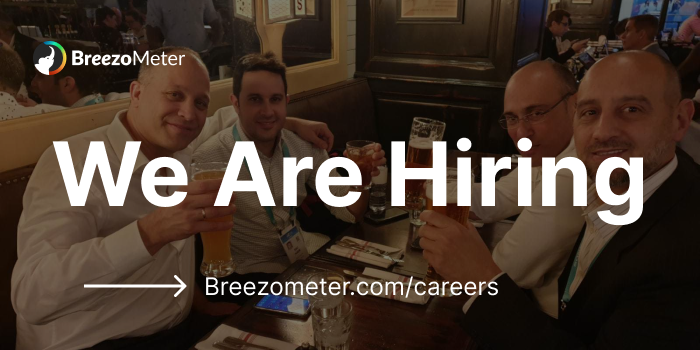