Poor Air Quality & Atopic Dermatitis - Is There a Link?

Many of us automatically associate the health impact of air pollution with respiratory problems, but new studies highlight how unmanaged pollution exposure can impact our health far beyond breathing - even our skin (!) In particular, research has found connections between long-term air pollution exposure and atopic dermatitis flare-ups.

What is Atopic Dermatitis?

Irritants such as laundry detergents, hand and body soaps, and shampoos, as well as dust mites, pet dander, pollen, and mold spores, are all known to trigger atopic dermatitis flare-ups. Certain environmental conditions such as cold and dry weather are also considered to be possible agitators.

Of course, while hot and humid weather serves as a relief for some, for others it triggers prickly skin reactions. Skin types and sensitivities vary greatly between people, which is why skincare brands offer such a wide range of remedies and treatments.

But besides all these triggers, could there be other environmental factors at play?

A new cross-sectional study has discovered a possible connection between air pollution from wildfire smoke and an increase in clinic visits for exacerbated atopic dermatitis symptoms. Examining the impact of the 2018 Camp Fire, researchers found the rates of atopic dermatitis clinic visits in San Francisco increased by 49% for children and 15% for adults during the fire period, compared to weeks with no wildfires.

The researchers also linked a 10-μg/m3 increase in weekly mean PM2.5 - often the dominant pollutant in wildfire smoke - with a 7.7% increase in weekly pediatric itch clinic visits. In addition, they found the rate of prescribed systemic medications for adults increased by 45% during the Camp Fire period compared to non-fire weeks.

A number of other studies have also highlighted the connection between air pollution exposure and skin conditions such as atopic dermatitis and eczema:

The Implications: Skincare Brands Turn to the Environment

As new connections are drawn between air pollution and skin conditions, we predict more leaders in this space will look to enter the air quality monitoring and research space.

As individuals react differently to the environment based on a host of factors, we also predict that personalized environmental data and insights will play a bigger role in our skincare of the future.

Leading brands such as L'Oréal, Neutrogena, and Dermalogica are already using personalized environmental insights to communicate with, educate, and improve their offerings in precisely this way. (We explore this in much more detail here). 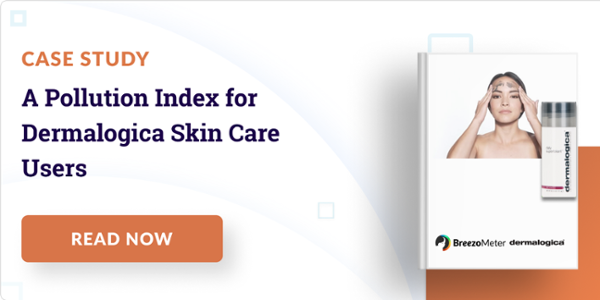 I have more than 20+ years of experience working in healthcare IT and am currently overseeing BreezoMeter's expansion in the US healthcare market.