Indoor Air Pollution: What You Need to Know

Think about your day: you woke up, commuted to work, spent about 8 hours there, and came home. Maybe you went to the gym or out for a bite to eat. Pop quiz: how much of your day was spent inside?

This isn’t to scold you: in fact, most of us spend about 90% of our time indoors. Take a second, though, to consider the air you’re breathing at home, at the office, at school, or wherever you may be. We take about 20,000 breaths of air every day. Ever wonder what you’re actually breathing in?

We have too. Let’s figure it out together.

Indoor air quality is more important now than ever

Indoor air pollution is a significant issue: the WHO estimates that around 3 billion people worldwide are still cooking and heating their homes with dirty, solid fuels on cooking stoves and open fireplaces, which are the main ways indoor air gets polluted with particles like NO2, SO2, PM, and more. Add in cigarette smoke and open windows that let smog in, and the resulting pollution kills over 4.3 million people every year.

This is largely in developing nations who don’t have access to reliable electricity and appliances. However, indoor pollution is an increasingly big concern in developed nations as well. The reason is simple: numerous studies have found that indoor air quality is dependent on the outdoors.

And as outdoor air pollution is quickly worsening in major, developed cities across the world – like London, Oslo, and Paris  – indoor pollution worsens as well. This has major consequences for people in cities across the world: as we sit on the couch or at our desk in the office, the air we’re breathing continues to get worse. Studies have found, for example,  that reducing common sources of indoor air pollution can significantly improve performance at work. There’s an increasingly relevant name for this phenomenon: the ‘Sick Building Syndrome’.

What makes indoor air pollution different than the outdoors?

There are, however, a few key differences between indoor and outdoor pollution. Outdoor air pollution can change from one city block to another. But with indoor air, it’s even more concentrated: homes and offices are divided into different rooms, which often have different pollutants, ventilation, and window access. This makes it harder to know what the air is like in any given room, and individual sensors haven’t proven to be of much use, because they’re room specific and not as reliable as government monitoring stations.

There also tends to be a wider variety of pollutants and allergens indoors. For example, when indoors, we commonly deal with bacteria, mold, odors, fumes, and other particles that aren’t as powerful when outside. There’s also other indoor sources, like space heaters, cleaning products, paints, pesticides, and many more.

So, how can we improve air quality where we live, work, and play?

While outdoor air quality can be avoided, it’s hard for an individual to improve it. It’s the opposite for indoor air pollution: it’s hard to avoid breathing bad air in a small space where you spend your days and nights, but people can take simple, actionable steps to improving the air in their homes, offices, and elsewhere. Ensuring spaces are smoke-free, have proper ventilation, and safe heating and cooling is a great first step. For those who are more concerned about the air they breathe, connected smart home devices – like air purifiers – are becoming an increasingly popular option as well. 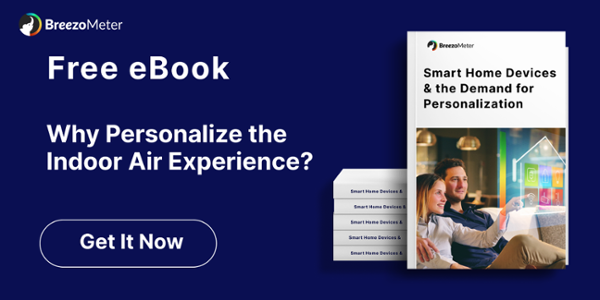