As climate change makes annual wildfire seasons longer and more devastating, predicting when and where these disastrous blazes will spread has become crucial. But is it actually possible to do this?

In order to start, a wildfire needs fuel, oxygen, and something to ignite it. In many cases, certain weather and climate conditions combine to make wildfire events more likely - affecting how they spread and how much land they burn through within short timeframes.

Lightning is globally recognized as the dominant natural cause of wildfire ignition, producing the largest wildfires in many regions.

Scientists are also beginning to understand how lightning and wildfires can function as two parts of the same self-perpetuating cycle.

When dry thunderstorms can unleash over 700,000 lighting strikes in a single day, wildfires become almost inevitable. Scientists predict areas burned by lightning-ignited wildfires in the Southern Eastern US will see a 30% increase by 2060.

As global temperatures increase, longer and more extreme heat waves contribute to an increased likelihood of wildfire events by evaporating moisture from the surface to the atmosphere as hot air can contain more moisture than cold air and thus acts kind of like a sponge. This creates a high abundance of dry vegetation, which is fuel for a wildfire. A lack of rainfall will enhance this effect and drastically increase a fire season’s severity.

This climate-change-induced extreme heat trend can become a regular occurrence in the coming years. Projections say that at the current rate of emissions, we could reach 2°C global warming by 2040. At which point, such extreme heat wave events, estimated to occur once in 1000 years, could repeat every half or full decade.

Unstable vertical movement of air, which occurs as hot air rises and cold air descends (much like in boiling water) can have a direct impact on a fire’s behavior:  A fire can become more intense due to unrestricted updraft air currents just as if you open the damper of your stove. The additional heat of the fire enhances this effect. And it also helps smoke pollution climb higher.

How Strong the Wind Blows

As atmospheric instability increases, stronger gusts of wind in changing directions can occur more frequently. Strong winds can then accelerate the dehydration of vegetation and carry small burning debris, helping to spark new fires and give existing ones more fuel.

The Right Stuff to Burn

The geographical features of a region also greatly impact the burning potential and likelihood of a wildfire event: In particular, forested areas can become arid and highly flammable during droughts and extreme heatwaves. Even a tiny spark can turn into a raging blaze.

Until recently, mountainous regions were considered safer due to colder air and increased moisture at higher altitudes. However, a new climate change study suggests forest fires have started reaching higher, wetter elevations, and now threaten an additional 11% of western US forests.

How Humans Contribute to Wildfire Events

Experts estimate human-caused wildfires may be more destructive during wildfire season, as they often occur near populated areas, and drought and heat facilitate fast-burning conditions:

It’s not always possible to predict the precise trigger or spark for a wildfire event, but wildfire risk can be estimated to some extent by understanding how climate, topography, weather, and land cover impact fire behavior and the likelihood of a fire spreading. (We discuss this in more detail in this webinar).

As climate change contributes to worsening wildfires, it’s never been more important to consider how different environmental factors come together to dynamically impact our health and safety during fire season.

Dive Deeper with this On-demand Webinar: 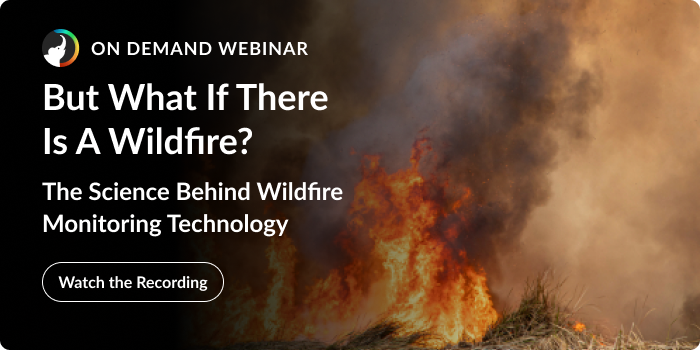