How Air Pollution Moves Between Countries

You probably already know that local weather is greatly affected by meteorological changes on larger scales, such as fronts and jet streams. However, these large-scale currents in the atmosphere don't only change the weather, they also carry air pollution a really long way - but how does this happen?

Air pollution moves and disperses. Some of the first records of regional scale anthropogenic (man-made) air pollution refer to the effects of acid rain – a wet or dry deposition of acidic material from the atmosphere.

Acid rain can include rain, snow, fog, hail, and even dust. It can also be a naturally occurring phenomenon (caused for example by volcanoes), or by NOx or SO2 emissions from coal and fuel burning.

The corrosive effect of acid rain was first described in the 17th century when people started to experience smoggy cities in England, but only in the 1960's did the U.S. begin to recognize acid rain as a cause for negative environmental and ecological events.

Every winter since 1998, Harvard University covers some of the bronze and marble statues on its campus with waterproof material, in order to protect them from damage caused by acid rain and acid snow.

About 40 years ago, reports also started coming in from Canada, the U.S., and Scandinavia regarding “dead lakes.” The reports stated that these lakes had become too acidic for fish eggs to evolve, resulting in very low numbers of fish.

It turned out that coal burning,was responsible: The wind had carried away high concentrations of SO2 over long distances (hundreds of miles), transformed it into acids, and when it later rained over the lakes, it polluted the previously clean water.

Another recent large-scale air pollution phenomenon is that of the yellow dust of Asia. The fast and extensive industrial development of China means that large amounts of pollutants are emitted into the air.

Intense dust storms and the swift, powerful winds that blow over the deserts of Asia can then carry these deadly dust particles and carry them eastward over China, Korea, and Japan.

The effects of these yellow dust storms are massive in the countries of Southeast Asia: Very low visibility, significant health effects even in healthy people, not to mention damage to plants and soil because of acid rain. In many cases, the air  pollution can even reach as far as the U.S.

Flying Smog - From Asia to the USA

Smog originating in Asian countries such as China, India and others, has been on the increase in the Western USA according to this USA Today article. In fact though, NOAA scientists assert this has taken place over the last 25 years during the spring, as wind and weather patterns carry air pollution across the Pacific Ocean.

How Air Pollution Travels Through the Hemisphere

If you want to investigate air pollution trends on a scientific, larger scale, take a look at the (now slightly dated but still valuable) 2010 document “Task Force on Hemispheric Transport of Air Pollution,” published by The European Monitoring and Evaluation Programme (EMEP).

This document presents measurements and modeling findings that describe how air pollutants travel between continents: westerly winds transport emissions from East Asia to North America, from North America to Europe, and from Europe to the Arctic and central Asia:

If you'd prefer a slightly less scientific reference, our Ultimate Guide to Air Quality Data tells you all the key facts you need to know when it comes to the nature of air pollution and why the reporting of different air quality data sources can look so different.

You don’t have to go far along any border between countries to find a huge amount of air pollution. After all, air pollution does not know borders. Big industrial complexes found in Eastern Europe and Southeast Asia are particular contributors to cross-border air pollution, however, as we've covered many times, the smoke caused by unpredictable and fast-moving wildfires can also be a major cause.

By the 1970's, most of the world knew there were negative consequences of pollution emissions to the atmosphere, so a number of countries formed agreements to try to reduce emissions. 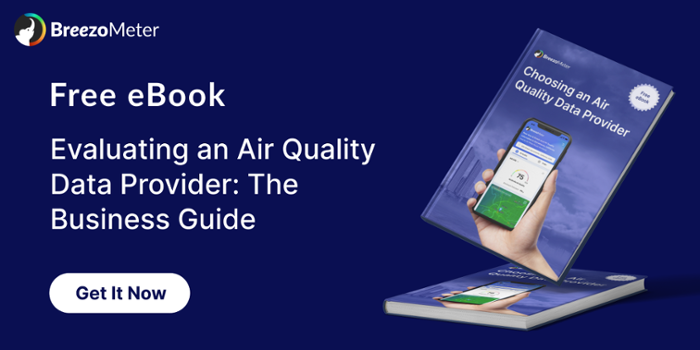 Ms. Shaked Friedman has a B.Sc from the Technion, Israel Institute of Technology, and has been an Environmental Engineer on the Research and Development Team at BreezoMeter since 2014.