As more businesses are looking for new ways to increase user engagement and make a positive impact on their users’ lives, more brands are coming to BreezoMeter to find out how integrating accurate air quality data can provide added value.

In the UK alone, “millions of people in towns and cities are breathing in levels of pollution that are illegal and harmful for their health,” and thousands of people die each year because of air pollution.

Recent revelations have shown that nearly 95% of London’s population – some 7.9 million people – live in areas exceeding global guidelines for toxic air particles by more than 50%.

But don’t think for even a moment that this is a uniquely British problem! People around the world are exposed to air pollution levels that are many times what is considered safe.

We can learn more about the issues involved, and how to reach our users, so they can take simple steps to reduce their exposure to harm, by following some top influencers on social media.

Consider following these 8 influential people and organizations driving the cause to help people breath cleaner air.

“London’s air is a public health emergency” tweets Mayor of London Sadiq Khan, a strong advocate for improving the air pollution situation in London since Day 1. His impressive initiatives are helping to reduce the toxins in the air in the city by limiting such things as wood-burning stoves and older vehicles that emit more pollution than newer models. This leadership will help see London into better and cleaner days.

Rosalind O’Driscoll is a final year PhD student at the Centre of Environmental Policy. Her research is based in real-world transport emissions and specializes in pollution from diesel cars. Her research and dedication to improving London’s air is truly making change! On twitter, she quotes the WHO:“To date, air pollution – both ambient and household – is the biggest environmental risk to health.” Follow Rosalind O’Driscoll on Twitter

A mom on a mission: Shazia Ali-Webber is campaigning for a better future for the children of London. Her campaign, I Like Clean Air, is directed at creating a cleaner, safer future for children. Together, parents and their young ones are working to spread awareness about London’s air pollution issue. Follow on twitter.

Ian Mudway has years of experience learning about and understanding the long-term effects of air pollution. As a lecturer on Respiratory Toxicology, he can be found educating the public on why improvements must be made. “Dr Ian Mudway @LondonAir on new study that finds children in polluted areas have up to 10% less lung capacity.”

Shirley Rodrigues was appointed as Deputy Mayor for Environment and Energy in October 2016. Since then, she has used her expertise to help launch the Mayor’s plan of action to severely reduce air pollution. She has a passion for environmental issues and is working vigorously to make London a better and safer place to live. Read her recent piece: The Government Need To Step Up And Tackle London’s Filthy Air.

Dr. David Green has been with his project for 20 years. He works hand in hand with the Marylebone Road Atmospheric Observatory, which has played a key role in measuring air pollution in the UK. Together with Dr. Green, it showed the effects of direct NO2 emissions for the first time, and continues measuring air quality and how it affects health. “Government spent £370,000 losing air pollution legal battles – you could retrofit 25 buses with SCR for that.” See more of Dr. David Green’s tweets about air pollution.

Fighting the awareness issue online is BreatheLife, an incredible initiative lead by the World Health Organization (WHO), United Nations Environment and the Climate & Clean Air Coalition (CCAC) to inform and instruct people on how to do their part in improving air pollution. The global campaign connects people and places and empowers them to do more, resulting in an increased awareness and action against the problem. Follow them on Twitter here

Another advocate for information and power is Healthy Air, a campaign designed to inform the uninformed. By offering easy ways to make change, Healthy Air is reaching people across the nation, creating a more aware society ready to take action. Join the campaign! and follow them on twitter here. 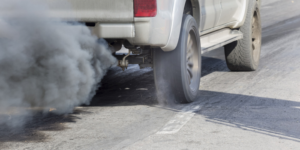